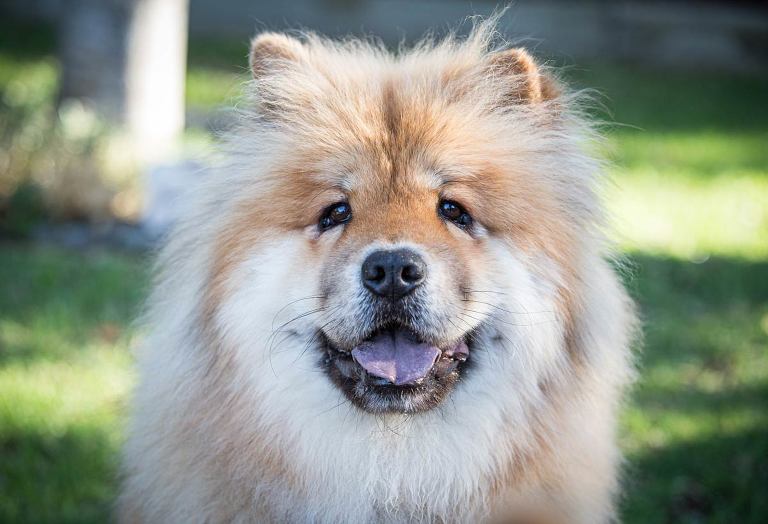 What sort of personality do Chow Chow dogs have?

Compared to many dog breeds, Chow chows are not usually known for being overly social or outgoing dogs and can tend to be aloof with strangers. Anecdotal evidence also suggests that they can sometimes be aggressive with other dogs.

This is in keeping with their history where they were commonly used as guard dogs for homes and livestock.

To create a friendly, family dog, early socialization to other dogs, pets and people is important. Some owners have also discovered that they can be persistent barkers if not trained early.

What are the characteristics of a Chow Chow dog?

The most unusual characteristic of a Chow Chow dogs is the blue or black tongue.

Their dense teddy bear look and mane of fur around their face and neck usually hides their wrinkles underneath.  This also contributes to their scowling expression.

Their legs are straight and erect ears give the impression of an alert and powerful dog.

Are Chow Chows an intelligent breed of dog?

Chow chows are commonly assumed to be intelligent dogs but they have both an independent and a stubborn streak, so training them can be challenging. Professional training from an early age is probably worth considering. Chow chows can also be fiercely protective so might need training to control this guarding tendency.

Chow Chows do make good family dogs, but they do require plenty of early socialization, especially exposure to children. Training from an early age should help them clarify their position in their family so that they don’t try to become dominant in the family.

The short answer is YES!

Grooming of Chow Chows varies with the coat type. A rough-coated chow chow does best with a daily grooming to keep them free of tangles and dirt, whereas smooth-coated dogs can be groomed briefly once or twice a week.

Special attention needs to be paid to keeping the eyes and the facial folds clean because the dense coat can retain dirt and debris.

Where are Chow Chow dogs from?

The Chow Chow breed originates from northern China and can be traced back thousands of years.

Used as working dogs of one kind of another, the Chow Chows have had a variety of jobs over the centuries, ranging from guard dogs to hunters, and sled pullers.  There is evidence to suggest that they were also eaten at times, but thankfully this seems to be a past habit for their horrid humans.

The late 1800s saw the breed reach the Western world and lead a rise in  popularity, which today puts it in top-10 of American Kennel Club breeds.

How big do Chow Chows get?

As with all dog breeds there can be a lot of variation in sizes, but the Chow Chow on average will grow to about 19 inches in height, with a weight of between 20-30KG as an adult.

How much exercise does a Chow Chow need?

Chow Chows only require a moderate amount of exercise of approximately 20-30 minutes per day.

Ready to book your session? Got a question?

Give us a call or send us a message and we'll get back to you as soon as possible!